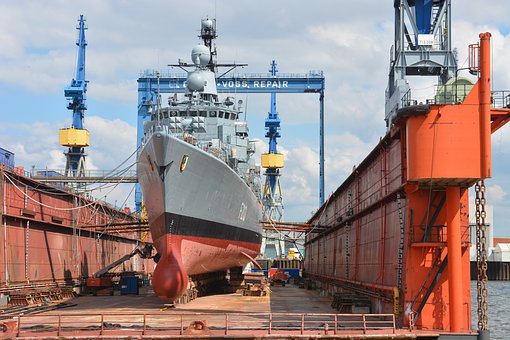 A shipbuilding accident has claimed the life of a veteran Newport News shipbuilder.  The worker, who has not been identified, may have fallen into a tank while working on the aircraft carrier USS George Washington. This is a tragic example of how no one in the industry is exempt from the risk of maritime injury.

The accident occurred a little before 2 p.m.  on August 19, 2019.  The story broke long before rescue workers from the U.S. Navy could attempt recover the body.  Company representatives have stayed mum about the deceased worker’s identity pending the notification of his next of kin.

The president of Huntington Ingalls Industries Newport News Shipbuilding Co., Jennifer Boykin, released a statement to the deceased workers colleagues about the shipbuilding accident.  The statement revealed the worker was a construction supervisor with 39 years of shipyard service.  Though the details are still unclear, in the early stages of the investigation all signs indicated that he fell while working in a tank.

Despite the diligent efforts of the U.S. Navy rescue and response personnel, the worker died from his injuries, however they occurred.  Sadly, at the time of Boykin’s statement, efforts to recover the shipbuilder’s body from the tank were as yet unsuccessful.

“Our main focus right now is on this recovery effort,” she said, “Please keep our fellow shipbuilder in your thoughts and prayers.”

The USS George Washington Spirit of Freedom is in the shipyard for refueling and a complex overhaul.  For an aircraft carrier like this, an overhaul is a four-year-long project that takes place only once during a typical ship’s 50 years in service.  This carrier is about halfway through its overhaul, which began in August, 2017.  An overhaul of this scope includes:

The aircraft carrier is a Nimitz class vessel.  The ship is about 1,000 feet long, 97,000 tons, and can carry 60 or more aircraft, according to the U.S.  Navy.  In a workplace of such vast size with so many hazardous projects occurring simultaneously, the potential for injury is great.

Having not yet recovered the worker’s body after the shipbuilding accident, the company still cannot say for sure exactly where on the ship the incident occurred.  Information remains scant as the company investigates.

Shipyard workers labor in some of the most risky working environments.  The fatal accident involving a worker with almost four decades of experience illustrates the caution workers require to stay safe.  There are several considerations for workers, such as:

In the first place, shipyards are not plush and comfortable working environments.   Almost every task a worker will undertake in their workday is dangerous.  Workers often face uncomfortable conditions due to weather.  Many shipyard workers are vulnerable to hazardous materials throughout the workday as well.

In some functions, workers might struggle through cramped conditions or teeter on high scaffolding.  The conditions of the job make for a lucrative career, but not without risk.  The hazards workers face make their work extremely valuable.

The proximity to moist sea air and spray coupled with dangerously high working areas poses the constant threat of fatal falls.  A shipbuilding accident that results in a fall is often fatal because of the great heights from which workers can fall.

In addition to fatalities, shipyard falls can easily cause other severe injuries such as:

For many shipyard workers, duty may call at any time of the day or night.  Some emergency repairs can cause workers to work longer than average shifts for days at a time.  Tired workers increase the chances of a shipbuilding accident by making the work environment a little more dangerous for everyone.

Shipbuilding happens on a large scale.  The machinery used is enormous.  Safely operating it requires immense skill and prodigious strength.  Consequently, small mistakes with such heavy duty machines can prove fatal or cause serious injury.

Fire is one of the worst disasters that can befall a shipyard.  Between the plentiful piles of combustible materials, frequent showers of sparks, and electrical cords fire is an ever-present threat in a shipbuilder’s workday.

Though largely out of use in most construction ashore, asbestos is still used in shipyards.  Shipbuilders exposed to asbestos are vulnerable to cancers like mesothelioma.  Exposure of this type is one of the most significant health dangers workers in shipyards face.  Asbestos exposure has been known to cause cancer decades later.  Maritime workers who work around this dangerous material once can be at risk for related cancer the rest of their lives.

Many shipyard workers simply don’t know their rights when they experience a shipbuilding accident.  Their employers may have led them to believe it’s not possible to file a workers’ compensation claim. Their employer also may have forced them to sign an arbitration agreement.

The truth is, the practice of maritime injury law exists specifically to protect maritime workers when they experience injury due to their employer’s negligence.  Shipyard workers have rights, and they have options.

Are You the Victim of a Shipbuilding Accident?

If you have fallen or been injured while working in a shipyard, talk to Maritime Injury Guide about your options for holding your employer responsible for your injuries.  You may be entitled to compensation that can recover the costs of lost wages, medical bills, and your pain and suffering.

If you have lost a loved one in a shipbuilding accident, you may also qualify for compensation and certain benefits.  Find out more by contacting Maritime Injury Guide.  Schedule a free injury consultation with our maritime lawyer by calling 1-877-363-6148, or contact us online.